The now-closed “Store at Five Corners” occupies one of the most historic locations not only in Williamstown but in all of Berkshire County. Here where Mahican trails crossed and the Hancock Brook joins the Green River Isaac Stratton and his new bride Mary Fox came two hundred and fifty years ago, to settle. With the French and Indian Wars winding down and the lands in South Williamstown surveyed into fifty acres lots these lands were considered the prime farming land in Williamstown.

Isaac Stratton with his family had moved from Warren Massachusetts to Williamstown the previous year and his father Richard quickly bought several lots in town and lots 53 and 54 in South Williamstown. These two lots are the land the Strattons farmed. Isaac and Mary built a cabin in 1761 just north of the brook and remained the only settlers in South Williamstown for three years. During this period their home also served as a tavern.

By 1765 other settlers began to arrive. Among them were Samuel and Hannah Sloane. Sam was a blacksmith by training but also proved to be a very successful land speculator. He built a large log house on the right side of Sloane Road near Oblong Road and in 1767 bought Isaac Stratton’s cabin and land near the brook. In 1770 he built a tavern on this site. The building today is The Store at Five Corners.

As the number of settlers grew along with anti-British sentiment a military line was drawn on the map of Williamstown dividing the town in two equal parts called The North Part and South Part. Because the poor condition of the roads made travel to and from town difficult and time-consuming residents of South Williamstown had already begun to turn inward and the tavern was the place to meet.

The citizens of the South Part were fiercely anti-British. Sam Sloane and a small number of South Williamstown men fought already at the Battle of Bunker Hill. In August 1777 a company of South Part citizen soldiers under Captain Samuel Clark gathered at the tavern and marched north to join General John Stark in Vermont and engaged with him in the spectacular victory against the German mercenaries of British General John Burgoyne, who were attempting to capture an American supply depot in Bennington. Almost two dozen of these men are buried in Southlawn Cemetery across the brook from the tavern/store.

After the American Revolution stores and small factories started to appear in the Five Corners area largely to serve the growing population. Samuel Sloane’s tavern was now run by a relative. It changed hands a number of times but remained an inn as well as a meeting place for eating and drinking. John Jordon, who owned the tavern between 1833-1865, added a second story with a porch across the front of the upstairs. The meeting room upstairs was used every third year for town meetings. A wing was attached to the back to fill the needs of parents visiting their sons attending the prominent boy’s prep school across the road. There was a livery stable next door to the tavern and the tavern served as a stagecoach depot. The tavern also housed the first Post Office in South Williamstown. 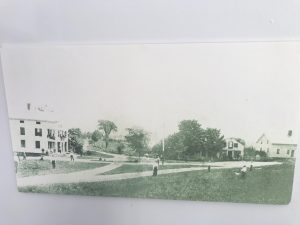 In 1905 new owner John Steele closed the inn and opened a grocery store downstairs in the building. His living quarters were upstairs. Later gas pumps were installed out front. The store personified the New England country store. It continued in the Steele family for the next half-century. 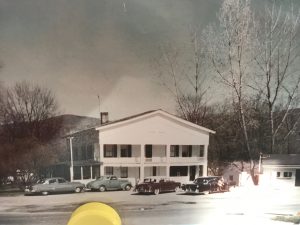 When the New Ashford Road was widened in the 1920s the store was moved back and the wing was removed. The wing was moved to the next-door farm and used as a private residence. It was recently torn down by the current farm owner.

During the Depression, Thomas Steele saved many families by allowing them to run up tabs he knew they could never pay. On a more amusing note a local historian relates “During the Steele’s’ ownership, rocking chairs adorned the front porch along with redeemable bottles that children would exchange for penny candy. South Williamstown residents recall as children would collect the bottles in front of the store and redeem them for a penny, the penny was then used to buy candy. After the transaction, Mr. Steele would put the bottles back out again to be redeemed by the children.” This symbolizes not only the generosity of the Steeles but also has become the symbol of our community togetherness.

Elder residents still refer to this historic site as “Steele’s Comers.” Perhaps it is not too unrealistic that the South Williamstown Community Association would like to see some of this old-fashioned sentiment returned to a permanent re-opening of the Store at Five Corners–regretfully closed for the first time in 239 years. Until its closing in 2011 it was considered one of the oldest continuously operating businesses in the United States.